What if Agatha Christie had written about Miss Marble Cake?

You are here: Home1 / Uncategorized2 / What if Agatha Christie had written about Miss Marble Cake?

Local author Mathew Redford will be promoting his new book at Festival.
Addicted to Death – A Food Related Crime Investigation.

Following the murder of Benedict and Darcy Blacktail, two eggs savagely beaten to death outside their home by an unknown, fedora wearing assailant brandishing a large metal spoon, Detective Inspector Willie Wortel, carrot and the leading food detective in the police force, is called in to investigate.

When the only food sapiens minister in the Government, Professor Perry Partridge, is murdered at the Strawberry Strip Club, run by the young damson Victoria Plum, DI Wortel suspects that the two cases may somehow be linked.

Is Festival involved in someway ?

And so, in spite of being lactose intolerant, Matthew has decided to stand up for the food sapiens community who remain under represented in crime fiction literature. Matthew has set about filling this gap in the market by writing his delicious debut novel, Addicted to Death – A Food Related Crime Investigation.

Was Cracker really a psychologist or actually a water biscuit? 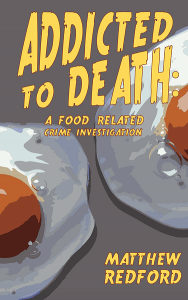 MLP Step up to Support Festival.
Scroll to top