You are here: Home1 / The Sellar Stage For 2019 our main music stage in Tanner Street Park is supported by Sellar and we are very pleased to welcome The Underdog Gallery on Crucifix Lane who have curated the line up.

Underdog London was first established back in 2007 on the Old Kent Road SE1, as an art gallery and live music studio. The ethos was to promote up and coming artists and creatives of all types and genres but mostly in the graphic art and rock music scenes, gig poster design, graffiti / street and outsider art.

The Underdog has since evolved in its current surroundings since 2011 as part of The Bermondsey Street vibe, while remaining true to its ethos of championing the outsider, but working and growing alongside some amazing, up and coming and well established artists and musicians.

As an eclectic arts and music bar with a welcoming environment for everyone to enjoy we’re really pleased to be given this opportunity to curate the Sellar Stage for Festival 2019.

Singer/songwriter, guitarist K.C.and Budi on drums have left Berlin, Germany, to
form this band in 2014.

In October 2016 they released their debut album
‘WetSuit’ which has been partly recorded on Budi’s 8-track tape in Berlin and
partly in London’s famous Space Eko East Recording Studio of Alex McGowan
(Tiger Lillies, Son of Dave, Jah Wobble, …) who also mixed and mastered it. The album recieved positive reviews from the indie
scene in UK and Europe.

After touring in 2017 the band have released a
single in March 2018 which was recorded by Grammy Award winning producerJimmy Hogarth at his Hoxa HQ studio in West London.​

London based singer, multi-instrumentalist, and producer 1403 (fourteen-o-three) has been something of an enigma over the past few years.
A classical trained pianist from a young age, Tom Cameron (1403) soon moved onto a variety of other instruments whilst being exposed to Motown, 50-60’s R&B, Classical and Jazz greats by his mother (a skilled Pianist and Cellist in her own right). An early introduction at age 5 to Sgt Pepper, Tom sights as the moment ‘my world changed forever’.
During his early teens he immersed himself into the Underground Rave and Electronic music scene that emerged in the UK before self-learning guitar and forming his first band at aged 16.
Since then he has popped up in various guises including UK Rock Trio ‘Crystal Head’ writing and collaborating with artists such as House Music legend Sasha, Disturbing London’s G-FrSH and Cypress Hill to name a few and he has also contributed to various film scores and advertising campaigns across a wide range of genres and styles.

The New Jazzmags are a seven piece vocal led hip jazz and underground funk grooves band
Operating since 2013, the NJM’s features an all star line up of top London based musicians with many years of live and recorded music performance between them.
Led by saxophonist Steve Elliott, and featuring vocalist Lee Dread, guitarist Alex Myers, bass virtuoso Rowan Barrett, top drums man Tom White with Dan Newman (keys) and Daniel Fitzgibbon (percussion) the NJM’s have been performing live music in pubs, clubs and at weddings and functions across the UK.
Our influences span Jazz, Soul and Funk repertoires and draw on the work of artists/bands like The Meters, Melvin Sparks, Galactic, Dr. Lonnie Smith, Quantic and Stevie Wonder.

The Lunar Effect play fuzz laden riffs mixed with vintage psychedelia in a hard rock homage to bands like Black Sabbath and Led Zeppelin, laced with a modern twist.
The bands original line up was formed in 2014 by guitarist/singer Jon Jefford and his brother Dan on drums. After recording some material with various local musicians, they met bass player Brett Halsey and singer Josh Gosling in 2016 .
This led to the release of their E.P “Strange Lands” which received glowing reviews from music blogs around the globe, leading to the band being heard on Kerrang radio, Radio X and Planet Rock radio.
In 2018 the band signed with Kozmik-Artifactz Records, releasing their debut album ‘Calm Before the Calm’ earlier this year. The album has already attracted critical acclaim from the most respected blogs, youtube channels, websites, radio stations and magazines worldwide.

The Sitar Service is a group formed by classical Hindustani singer Sameer Khan, sitarist Rod Bourganos and percussionist Anthony Paine. The trio revisit and re-imagine themes of the late 60s & early 70s Rock Music and blend it with Hindustani classical Ragas, taking the listener on a sensorial journey. 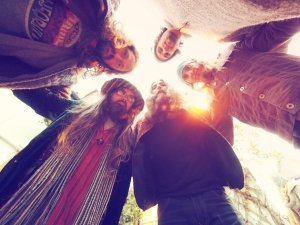 Last year the band had their first song in a movie..’Going Furthur’ a new film about the 50th anniversary of Ken Kesey’s bus trip across America. 2019 brings a very exciting year ahead..recording album number 4 and playing top summer festivals and gigs. Including their first appearance at Glastonbury Festival and in July supporting The Chris Robinson Brotherhood (former Black crowes) on their European tour.
Reviews:
Love it, love it, love it!” – James Santer – BBC Introducing.
“Made by Wizards I reckon!” – Tom Ravenscroft – BBC6 Music.
“ Magic Bus always thrill in their own ingenuity, song craft and upbeat cosmic vibes. An album like this is really needed and they have indeed truly delivered.” – Jon ‘Mojo’ Mills Shindig Magazine.
“All aboard for a genuinely magical mystery tour.” – Dom Lawson PROG.